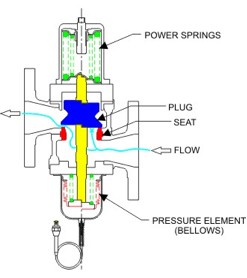 As the pressure increases and the valve moves to a more open position, the spring is further compressed and the spring force increases. The sum of the positioning forces is equal to zero when the valve is in a steady-state position. If changes occur within the system, equilibrium is upset. The valve responds by changing position until the spring force again equals the force from the pressure element and equilibrium is re-established. In a typical refrigeration application, as the "load" on the chiller increases, the pressure and temperature of the refrigerant will rise, causing the valve to open and the water flow to increase.

Due to the regulating action of the valve, the flow of cooling water through the condenser keeps pace with the load on the refrigeration system and the refrigerant head pressure is maintained within a relatively narrow range.